The IDMP Central and Eastern Europe, together with the Drought Management Centre for Southeastern Europe (DMCSEE), is working together with partners to extend technical support to the former Yugoslav Republic of Macedonia, Serbia, and the Republic of Moldova. It is drawing on the guidelines, programmatic approaches, and demonstration projects developed over the last six years in the region. Read more 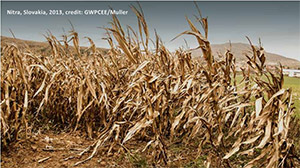 The regional programme of the IDMP in Central and Eastern Europe (IDMP CEE) aims to increase the capacity and ability to manage droughts in the region by working in partnership with over 40 organizations building on the network of the Country Water Partnerships.

In terms of water resources management and climate change adaptation, countries in Central and Eastern Europe are sensitive to variability and changing precipitation patters. Future climate scenarios in the region forecast increased frequency and severity of extreme weather events, which will result in the increase of droughts (Climate Change 2007, the Fourth Assessment Report (AR4) of the United Nations Intergovernmental Panel on Climate Change-IPCC). Each time a drought occurs, many of the same issues are raised in the region, such as: How much damage was inflicted, on whom, and where? Who is going to pay for it? How can we prevent, or at least reduce damages and their costs in the future?

From reactive to proactive drought management

A central goal of the Integrated Drought Management Programme is to increase the capacity and ability in the Central and Eastern European countries. By enhancing resilience to drought, it will be easier to adapt to climate variability and change.

Find out more about the Regional IDMP for Central and Eastern Europe (IDMP CEE).