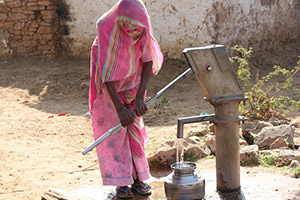 Over one billion people in South Asia are dependent on agriculture for their livelihoods. They are predominantly poor and vulnerable to drought. In order to prepare countries better for drought, the characteristics of their occurrence need to be well understood.

With this background, a Needs and Capacity Assessment Survey for the development of a South Asian Drought Monitoring System (SA DMS) was conducted in Afghanistan, Bhutan, Bangladesh, Maldives, Nepal, India, Pakistan and Sri Lanka with the support of GWP’s Country Water Partnerships. It revealed that there is no validated system of early warning on drought that could meet the requirement for a high spatial resolution in any of the surveyed countries.

Challenges that countries face include lack of hydrological/meteorological measurement stations, missing access to satellite data, insufficient rainfall prediction capability, or shortage of well-trained staff. In the assessment, the respondents came to similar conclusions: agriculture is the most vulnerable sector to drought.

Based on these discussions a clear way forward for the South Asian Drought Monitoring System (SA DMS) has been agreed with IWMI and additional co-funding secured. The system will be developed for the whole South Asian region, with a few countries in a first phase as a pilot to tailor the system to national needs jointly with our partners.

Some of the recommendations concerned the involvement of users and relevant government agencies throughout the project, as the key to the drought monitor’s success and particularly for the housing and ownership of the system nationally and regionally. The report also stated a need for clarity in the system, early involvement of users, considering the political nature of drought and the importance in data verification through on the ground observations.

The full Assessment Report is available here. Ready for the next phase At the end of phase 1 of the development of the SADMS an Interactive workshop on the South Asia Drought Monitoring System was organized by GWP South Asia on 20 April 2015 in Dhaka, Bangladesh in conjunction with the South Asia Climate Outlook Forum 6 (SASCOF-6). This intermediary workshop facilitated building user engagement in SADMS, and presenting the progress of developing SADMS to the users while the product is being finalized – the regional drought monitoring system is expected to be available within the first half of 2016. More information on the outcomes of this intermediary workshop is available here. The report of the technical development of the SADMS as part of phase 1 is available here.

SA DMS in the news